Why the USDA does not enforce the Animal Welfare Act regulations? Because they have no enforcement power - Animal Advocates


I'm a licensed wildlife rehabilitator and have a small wildlife sanctuary of unreleasable wildlife. I must have a USDA permit to keep these animals. The USDA inspectors told me they have no regulations on size of enclosures, enrichment, type of food...for raccoons, skunks, opossums or squirrels. They only state they must be "sufficient." That said California Fish & Wildlife does have specific regulations for each animal. Our enclosures, treatment are always superior to these minimum standards.

People have asked why the USDA does not go after people who violate AWA regulations. I asked my USDA inspectors who are all licensed veterinarians the same question. They have pets and love animals. They told me they have no enforcement power. If someone is a repeat violator, they will cancel their USDA permit. That is all they can do. They don't have the power to seize the animals, arrest the people or bring charges. They said if they take away the permit, the person will just operate without one with no oversight at all.

Now the California Department of Fish & Wildlife does have enforcement power in regard to wildlife. They can take away someone's permit. If they continue to operate without it, they've committed multiple felonies. They can seize all the animals, arrest the person and file charges against them.

That said someone should write, propose legislation to give the USDA enforcement power just like the Dept of Fish & Wildlife. All that said even with enforcement power the departments don't have the resources to seize and hold all those animals. They have to keep them as evidence until the case is settled or the owner agrees to give them the animals. These cases are long and drawn out.

The only time I've seen Fish & Wildlife take action is when a non-profit rescue has offered to care for the animals during litigation and agrees to take them if the owner or court allows it. That was the only way Fish & Wildlife went after Tiger Rescue. Fund for Animals took care of the tigers and eventually placed them all after the owner signed them over. This is the reason why Fish & Wildlife won't go after the Waystation who has been in violation for years and years. 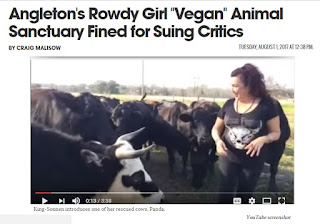 This case is identical to my case except in my case they forged their exhibits and perjured their statements on top of this. Hopefully I will have the same result with my appeal

"A Harris County District Judge has ordered the owners of an Angleton animal sanctuary to pay nearly $29,000 in sanctions for filing a frivolous, harassing lawsuit against critics of the sanctuary who called the operation a "scam" on Facebook.

Renee King-Sonnen and her husband Tommy Sonnen, who run Rowdy Girl, described as a "vegan" farm animal sanctuary, were also ordered to pay nearly $29,000 in defendants' attorneys' fees. The couple had sued the critics in February for $1 million, accusing them conspiring for nearly two years to disparage the sanctuary's reputation.  (Tommy Sonnen is also a sanctuary board member).

The critics — which included former volunteers and donors who questioned the nonprofit sanctuary's finances — raised questions on a Facebook page called The Real Rowdy Girl Revealed.

The defendants, which include Dallas child psychiatrist and former sanctuary donor Sujatha Ramakrishna, successfully sought to have the lawsuit dismissed with prejudice under the Texas anti-SLAPP statute, which is meant to safeguard against meritless defamation lawsuits.

In his lengthy reply, the critics' attorney, Adam Milasincic wrote, "There is no doubt what this lawsuit is designed to achieve — stopping the public debate about Rowdy Girl, and silencing critics who raise questions about Rowdy Gir's less-than-stellar fundraising and animal-welfare records."

A presiding judge agreed, ordering the plaintiffs on July 26 to pay $28,750 in sanctions, noting that "The Court considered lesser sanctions, but determined that [the amount] is necessary to achieve the [anti-SLAPP's] deterrent purpose. The Court concludes that, absent the sanction awarded, there is a material risk that Plaintiffs will continue to bring similarly unsuitable claims in the future."