Rescuing a raccoon from a tiny, dirty cage in a boat

by Mary Cummins on Tuesday, January 4, 2011 at 3:59pm
I received an email this morning from Peter Wallerstein of Marine Animal Rescue. He said the Los Angeles County Sheriff had impounded a boat that had a raccoon in it in a tiny dirty cage. I assumed someone had trapped a raccoon and just forgot about it. I drove to the Sheriff station to take a look at the boat. Peter agreed to meet me there to help.

The raccoon lived in that 2' x 2' x 2' cage. The cage door didn't open. When we finally took off the front of the cage we realized he was living on top of four inches of feces. He had no water. The boat was impounded. Sheriff called me when they saw the raccoon.

I met Sheriff Office McSchwab who told me about the raccoon. He said it wasn't in a trap but a cage like a pet. It had a chain around its neck. He took me to the boat to take a look. This is what I found. A four year old male raccoon in a 2' x 2' x 2' cage. There were four inches of feces on the bottom of the cage and no water. There was no door as it looked like the owner never opened the cage. The cage was in an awkward spot and had been assembled in the boat which would make transfer to the carrier more difficult. Fortunately Peter Wallerstein showed up to help. Unfortunately so did the "owner" of the raccoon.

Because he was a pet raccoon and could be unpredictable I thought I'd take him to Dr. Kenneth Jones in Santa Monica to get the chain off his neck and look him over. The raccoon had shown no aggression at all, just a little cage craziness. I gave him some water out of a sippy bottle because he looked dehydrated. He was very gentle and thirsty.

At Dr. Kenneth Jones giving the raccoon anesthesia. We wrapped the pet carrier in a plastic bag. This is the safest way.

Dr. Jones' staff gave the raccoon anesthesia so we could examine him. The easiest way to anesthetize an animal like this is to wrap the carrier in a big trash bag then use gas. After he was under they removed the chain. He had a cracked canine probably from chewing on the bars of his cage. He had some matts and was dirty and smelly. 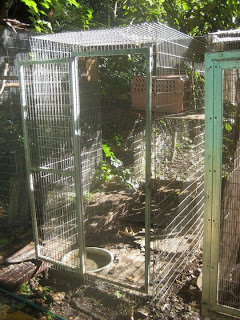 This is his new enclosure, 6' x 6' x 4'. It has a padded cage and is smaller than my other enclosures. He's never climbed or walked before so I need to start him in something small.

UPDATE: I just added a ramp in his cage. He cannot climb at all
I took him home and put him in a 6' x 6' x 4' cage with a padded floor. He came out of his carrier then I realized he couldn't really walk. He walks on the back of the "wrists" on his forelegs and on the heels of his back feet. I don't think he's ever stood up all the way. He cannot climb at all. He was relaxed and sweet. I can easily hand feed him food. I had to add a ramp to his cage so he can get to the lower level. I have him  next to the baby raccoons so he won't feel threatened by my injured adult females. He is a bit smaller than my adult females, probably from malnutrition. 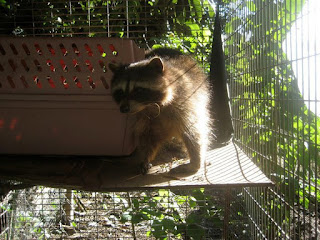 This is how he walks. He walks on the back side of his wrists. He also sleeps with them in this position. Obviously some metabolic bone disease. The pads of his feet look fine.

Thanks to the Los Angeles County Sheriff http://www.lasd.org/ and  Peter Wallerstein of Marine Animal Rescuehttp://www.marspecialists.org/ I wouldn't have been able to rescue the raccoon without their help. I will add updates on his progress.

UPDATE: A member of Animal Advocates is now caring for "Harbor" the boat raccoon. He's making remarkable progress under her cage. Here he is today, January 20, 2011. Look how healthy and happy he is? This video will make you soooo happy!