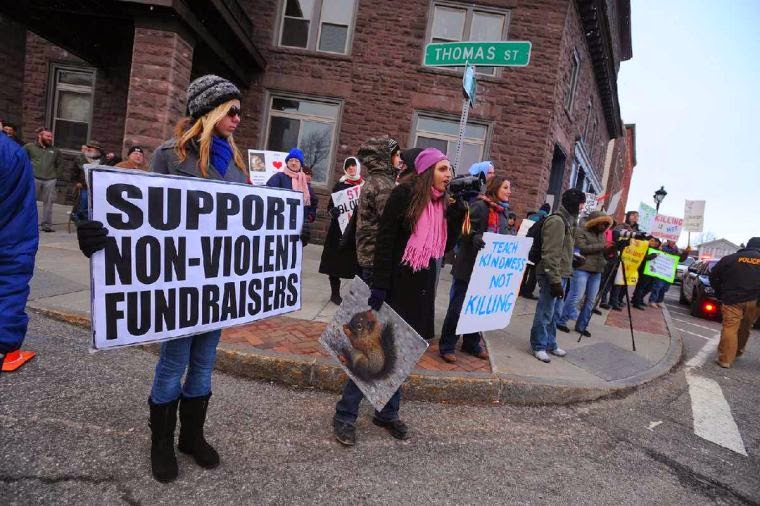 Every year the Holley Fire Department has a squirrel hunting contest called the "Squirrel Slam." Money is raised to support the fire department. The hunt is open to kids and adults to come and kill squirrels. Prizes are given for heaviest squirrels killed. Encouraging kids and adults to kill animals to raise money for charity sets a very bad example. Please, have a non-violent activity to raise funds.

February 21, 2015 Saturday is this year's event date. Yesterday someone filed an injunction to hopefully stop the hunt. The motion will be heard tomorrow Thursday the 19th of February. I will post the hearing outcome. I don't feel too confident with the motion as they are claiming an Environment Review must be done for the hunting contest.

The shut down their fire department website this year. Facebook page to stop the hunting contest https://www.facebook.com/pages/STOP-Squirrel-Slam-in-Holley-NY/183371988453687

VegFest Los Angeles is a project of Toward's Freedom, a 501c3 nonprofit organization

The combination of great music, empowering speakers, environmental, humanitarian and animal welfare non-profits, kids' activities and a delicious food court make for an earth-friendly experience that is sure to be motivating and enjoyable for all.

Just when I think I've seen it all, raccoons being sold as food in Los Angeles - Animal Advocates

UPDATE: 02/14/2015: Supposedly the raccoons came from a wholesaler in Florida. More than one market was selling the raccoons. One market sold it for $22/lb. Investigation is ongoing.

Metro Supermarket located at 4819 Temple City Boulevard, Temple City, CA 91780 (626) 872-6955 is selling dead raccoons in a bag for $54 or $9.99/pound. They have been selling it for years they state. Authorities trying to figure out if it's legal. It might be legal if the source is legal. From a common sense point of view raccoon is the last meat you should eat. Every raccoon we've taken into rescue has had round worms which can be fatal to humans. You can't destroy it by just cooking it. They are also a Rabies Vector Species. This means they are more likely to have rabies though not all have rabies. Our main rabies vector animal here in LA is bats.

Supposedly raccoons are a "delicacy" in China which is odd as they are not native to Chine and have no raccoons there. I think some guy just told people it cures impotence or something to make money off gullible people. Turns out raccoon dogs which are not raccoons are native to Asia. They are called tanookis. Maybe they think they are raccoon dogs which we don't have here. Here is the original video from Christina Dow. In the video you see what looks like some large animals entire paw wrapped up. Here is the website for the market in English.   http://metrosupermarket.net/en/

Raccoon meat is legal to sell if it's legally procured and presented. This company sells raccoon meat. The small size one is a juvie raccoon. They should have USDA stamps. I think they sell them whole as there is no butcher who wants to dress them, i.e. skin, gut, cut up...

Nathan Winograd admits he is just an "author." Perhaps he should clarify that as "fiction author."

Finally Nathan Winograd shows his true colors. He admits he is merely an "author." He doesn't state he's a nokill consultant anymore as that business went under years ago. He also is not a shelter director. All he does is write fiction. 99% of what he writes is hate speech and defamation against HSUS, PETA, ASPCA....

While he lists he's an author he still has a non-profit No Kill Law and Advocacy. He asks people to donate to that organization. What does that organization do? It pays Nathan an annual salary. It also pays for office expenses, internet, travel.... He does do one event a year where he charges people to listen to his hate speech. At the event he tries to sell his book. In fact he went on a book tour that was paid for by his non-profit. The tour coincided with him speaking in some small rooms wherever he was.

He just paid for this ad and website against PETA. He bought this domain name. It's listed as his. Donations well spent?

Why does Nathan Winograd hate PETA, HSUS, ASPCA, Best Friends....? He's jealous of their money, huge donations. He gets $5, $10 there from little old cat ladies. The big groups get major donations from major companies. No big sane group would give him a penny except the meat, fur, dairy industries.

This is too much. Nathan is verifiable. He spent money to send out a press release asking Sam Simon to take back the money he is giving to PETA. His wife, family need to do an intervention with him. This is very crazy.