European Ape Could be Human Ancestor - or not. Pre-humans could have more than one origin - Mary Cummins, Animal Advocates 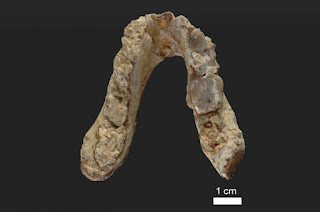 An article came out today suggesting that maybe the first pre-human originated in Europe.

"In 1944, German soldiers constructing a bunker in Greece uncovered a fossilized jawbone. The specimen was in poor shape, just a curve of mandible with its teeth mostly chipped away. “It was considered to be a specimen that nobody really knew what to do with,” said paleobiologist David R. Begun, a professor at the University of Toronto. But a new analysis of this broken jaw revealed that the bone is about 7 million years old. The jaw also has some humanlike characteristics, he says.

Begun and his colleagues say the fossil could represent the oldest known human ancestor. They further suggest that the fossil means our ancestors diverged from apes in Southern Europe — not Africa."

I have a feeling the true origins of humans will be complex. For instance marsupials originated in what is now North America. They moved between North and South America until they separated. Then they crossed the land bridge to Australia, New Zealand and continued to evolve into more varied species of marsupials. Marsupials went extinct in North America. Then when the Isthmus of Panama emerged 20 million years ago some marsupials made it back to North America. That marsupial is our only native marsupial the Virginia opossum. It hasn't changed much in 65 million years. Article is "Ancient origins of modern opossum revealed," December 2009, University of Florida.

Pre-humans may have also gone back and forth just like opossums via land bridges.